The following article is about 2 Chassidish Borough Park guys. They owned an auto collision shop and were purposely ruining the cars even more, by hammering them and so forth so they can get more money from the insurance companies.

They’ve been under investigation and were arrested.

If that isn’t enough of a chillul Hashem, over 100 idiot chassidim from Borough Park packed the courtroom to show their support…

Seriously, show your support for CRIMINALS? Why don’t you just have a Rav come out and openly SUPPORT insurance fraud.

Ohh… and btw, one of the guys was on “public assistance” and the authorities found $700,000 CASH in his house!

Shame on the chassidish community. They shoulda just allowed these morons to get arrested, but by “supporting” them they made it an even BIGGER chillul Hashem!

Posted by frumskeptic at 5:06 PM 3 comments:

The following was written by Sholom Aleichem. So funny how its applicable in today's society...

But something happened: in the last forty or fifty years a ray of worldly light has stolen into our corner of the earth and has reached even into our very synagogues, even there where the impoverished lads sat with their tomes. There you found them secretly snatching their first taste of secular food, some rhetoric as an appetizer, then swallowing - or choking over - a Russian grammar, with maybe a few chapters of a novel for dessert. From studies like there, naturally, no Talmudic scholars or famous rabbis emerged. Instead. Jewish youths wandered off into the world and were ruined, became doctors, lawyers, writers of prose and verse, teachers - and plain non-believers. Not a single rabbi who was worth anything. That is, there were a number of rabbis. But what kind? Crown rabbis wished onto us by the czar, whether we wanted them or not. As if he had said, "Here is a loaded bomb; hold on to it." But let us proceed...

-Sholom Aleichem in The Lottery Ticket.

Posted by frumskeptic at 8:57 PM 3 comments:

Check out the latest deals on Jewpon.com
Posted by frumskeptic at 7:55 PM No comments: 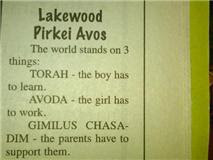 I was completely freaking out.

I don’t find it funny that the community has stooped so low that men are completely useless specimen and women and their parents are forced to support them.

It’s an absolute disgrace that I actually got this joke originally from a girl whose husband is learning. This joke implies that apparently girls feel no guilt or shame about forcing on ridiculous requests to their parents for support while they “work”- at a crappy job, which if it weren't crappy they wouldn't need parental support.

It’s an absolute abomination that our community has sunk so low that this crap is “funny.” Who the hell is gonna support the grandchildren when the time comes??

Posted by frumskeptic at 8:29 PM 3 comments:

The Problem with Frum Education

Education is one of the most important things a person can have and unfortuantely a lot of frum people cannot fathom its importance. For example, the idiotic HS I went to had a fantastic reputation. One would assume that a fantastic reputation in regards to a school means a GOOD EDUCATION, but in the frum community, it doesn’t. When I joined the school in the 9th grade, the vast majority of my grade has been in the school since Pre 1-A. When it came time to learn Shakespeare I rememeber one girl raised her hand and asked “who wrote the book Shakespaere or Caeser?” and another girl asked “Where was Shakespeare’s theater, London or England?”

Yes… 9th graders asked this… This school has a FANTASTIC rep! 9th graders should frikkin KNOW that Caeser came first, and they DEFINITLY should know LONDON IS IN ENGLAND!!!!!! I mean, REALLY?

Also one year, the school was very upset with the NYTimes for being anti-Israel and having a clear Pro-Arab bias in terms of their news coverage (I was in HS during the scary years of hightened terror attacks in Israel). One of the teachers (our Mechanechet to be exact) came in and told us all about how we should all go home and tell our parents as a sign of protest they should unsubscribe to the Times (Lucky me, my parents weren’t retarded enough to subscribe to it in the first place, given it’s a liberal newspaper and Jews really should know better). A few days later the VERY same teacher walks in with the times in her hand, and lo and behold, she explains “As a sign of protest we stopped subscribing, but we still need to read the news, so we get it from the newstand, they get their money from subscriptions anyway”… I remember thinking “Yes dumby, generally that’s true, but if they see a sudden surge in newsstand sales their advertisers wouldn’t mind as much!” … frikkin idiot was a teacher!!!!

A few years later and more dead-beat graduates, the school continues to have a fantastic reputation and clearly not for its spectactular education (as far as I know most of the teachers are the same)… why?:

Because the average frum person is an idiot. Yes, I said it. The average frum person sends their kid to a school not based on an education criteria (say going to 3 different schools and asking to see what they give their first graders for HW), but rather based on a “reputation”. The reputation, no one really knows what its based on. But it’s a reputation. I mean the girls come out normal? Umm… not from my experience… unless you consider traumatized for life (my case and the handful of other girls) vs. brainless spoiled idiot going for speech in a flooded market and getting married with huge debt to a guy that doesn’t work or has a crapa$$ job that won’t get him far… Really your daughter is screwed eitherway. I still can’t stress enough, the school has a FANTASTIC reputation.

So WHY does frum education suck so bad? Because the average frum person is an idiot.

Posted by frumskeptic at 8:23 PM 7 comments:

First they start with young innocent kids and molesting (don’t have a link). They commit an obscene amount of white collar crimes and then they go on a plane and you find out that a “woman had testified in Brooklyn federal court that she awoke to find the man's hand massaging her crotch and then her breasts.” The man? A rabbi?

Why is it that gd forbid a woman dresses untzniusly or eats a KOSHER cheeseburger (parve cheese or parve meat) and the entire frum community is in an uproar about our values being thrown out the window, but a freakin RABBI, father of 11, feels up a woman on a flight, and is it reported?

I wonder if they’re defending him saying she was dressed untzniusly (I don’t know how she was dressed, it’s irrelevant) and he couldn’t help it. Like it was the woman’s own fault or something. What the heck?

When my sister was in the 12th grade, her school really wanted her to apply for seminary. My sister really didn’t want to go to seminary so the school called my mother in an attempt to convince her that seminary was important.

I understand the frummy community wants to keep you in the system for that one extra year … that extra year is what turns many from just “programmed” to full on FRUMMY psycho. So while I think it’s none of the schools business, I understand their need to help the Rabbi’s control the population.

Any way… One would think that if you’re making a case to separate a child from their parent there should atleast be a DECENT argument involved… but of course, if you deal with frummies you get the following:

“You know Mrs. your child was in a sheltered Jewish environment, do you really think it’s a good idea to stick her straight into college? Its such a culture clash. Seminary is a great transition year!”

Ummm… ARE THESE PEOPLE HIGH? What would you think is easier? Transitioning from a year of public NYC transportation into a college environment, or switching straight from a year in Israel WHERE JUST ABOUT EVERYONE IS JEWISH AND YOUR ASSOCIATIONS IS MOSTLY WITH FRUM JEWS AS WELL?

This is why the Jew educational system is failing. You have idiots running the system

frumskeptic
I am 21-year-old and I have a BA in philosophy and law. :). I currently work for rent managment. Generally, I question just about everything people tell me. I'm not the type to beleive in everything I hear. So anyway, I started blogging. Enjoy! If you would like to be added to my blogroll you can email me at anexperiment@writeme.com or just comment, but if I see your comment and am busy at the time I am reading it, I may forget to add you later.